Cultivating a ‘spirituality of encounter’ this Advent 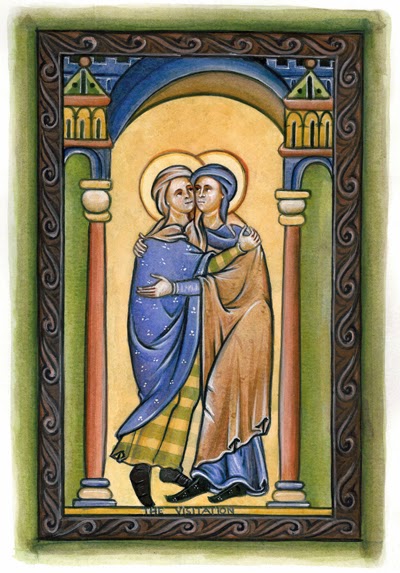 In September Pope Francis celebrated “the blessing of long life” with thousands of senior citizens and their families. In his homily that day he spoke about the Visitation of the Virgin Mary to her cousin Elizabeth, calling it “a Gospel of encounter.” The pope encouraged those present – and through them, all of us – to follow Mary’s example and re-establish a covenant between the young and the old. The future of society supposes the meeting between generations, he said, as the young “give the strength which enables a people to move forward, while the elderly consolidate this strength by their memory and their traditional wisdom.”

“Encounter” is a particularly rich concept, especially during this Advent/Christmas season. Isn’t “encounter” really what the Incarnation is all about? God encountered his creatures in the most direct way possible by becoming one of them in the person of his Son, Jesus Christ – God-with-us. Instead of rushing through December in a frenetic preparation for all that Christmas has come to entail in our materialistic society, what if we used this season of Advent to follow Our Lord’s example and concentrate our efforts on nurturing a spirituality of encounter in our daily lives? I would like to suggest two ways of doing this. The first is to encounter God each day in his Word. The opening chapters of Saint Luke’s Gospel alone are filled with numerous divine-human encounters that can teach us much about trusting in God and being present to others. Beginning with the two annunciations – Gabriel’s announcement to Zechariah that his elderly wife would bear a child, and his announcement to Mary that she would become the mother of the Messiah.

In Zechariah we see what happens when we are too set in our ways, or too convinced of our own limitations, to believe that God could possibly enter into our lives. In Mary we witness a very different response. She believes Gabriel’s words and offers herself completely to God in a relationship that will be miraculously fruitful. Then as Mary sets out in haste to visit her elderly cousin in the Visitation, the unborn children communicate with each other from their mother’s wombs, and the two women – one young and one old – share the unbridled joy of God’s presence in their lives. Mary’s Magnificat is followed by silence, but we can assume that Mary helped her elderly relatives prepare for the birth of their child. She would have observed their faithfulness and learned from their experience. As Pope Francis said, “Mary was able to listen to those elderly and amazed parents; she treasured their wisdom, and it proved precious for her in her journey as a woman, as a wife and as a mother.”

In the Visitation Mary shows us the second means of growing in the spirituality of encounter. Very simply, we learn to encounter others when we depart from ourselves and reach out to them in their need, when we listen to their hopes and anxieties, and appreciate their beauty and gifts. During Advent Mary shows us the way of openness to both God and neighbor. She shows us the way, as Pope Francis said, “of encounter between the young and the old.”

This Advent, I invite you to honor our Lord’s coming among us in the Incarnation by striving to practice the gospel of encounter. Begin by skipping just one trip to the mall in order to visit a sick family member or an elderly neighbor in need. Follow Mary’s way to an Advent of joyful, loving encounters!

Sister Constance Veit, lsp, is director of communications for the Little Sisters of the Poor.